Explaining the Relationship between Social Trust and Value Similarity: The Case of Estonia

The article is dedicated to explaining why value similarity fosters generalised social trust in high-trust societies. Previous findings by Beilmann and Lilleoja suggest that value similarity is more important in generating individual-level social trust in countries where the overall levels of social trust are higher, while in countries with a low level of social trust, congruity of the personal value structure with the country-level value structure tends to be coupled with lower trustfulness on the part of individuals. The article explores the meso-level indicators that could explain this relationship. The relationship between social trust and human values was examined in a sample of 2,051 people in Estonia, using data from the European Social Survey, round 7. The results suggest that when differences in socio-economic factors are controlled for, value similarity remains a significant factor in fostering generalised social trust in Estonian society. However, its direct effect is relatively low when compared with predictors such as trust in certain institutions, economic well-being, and ethnicity. Trust in the legal system and the police plays a particularly important role in fostering generalised social trust in a high-trust society wherein people believe that other people in general treat them honestly and kindly.

Generalised social trust has been proven to be extremely beneficial both at country and at community level: it is related to many positive outcomes, among them good governance and an effective state*1,*2,*3, economic growth and good economic performance*4,*5,*6, crime reduction*7,*8, and greater overall happiness and well-being*9,*10. These predominantly positive societal outcomes of generalised social trust result from one important quality of trust – it facilitates co‑operation between people and among groups of people. Many social theorists have considered trust an important building block of society precisely because society could not function without co-operation. N. Luhmann*11, for example, is one of those authors who emphasises the importance of trust as a facilitator of co-operation and a major contributor to the maintenance of social order at the micro level.

In this article, we explore the relationship between social trust and value similarity further. There is growing evidence that value similarity may foster generalised social trust in society*54,*55. Similarly to M. Siegrist and colleagues*56, K. Newton*57 claims that it is easier to trust other people in homogenous societies wherein people know that others share largely similar interests and values. Furthermore, individuals benefit from holding values similar to those of their reference groups because people are likely to experience a sense of well-being when they emphasise the values that prevail in their environment*58. 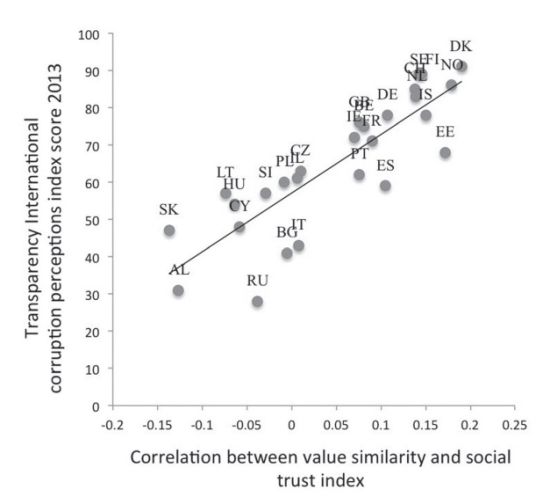 Figure 1. Correlation of generalised social trust and value similarity across countries, plotted against the overall perception of corruption.

European Social Survey data from round 7 that were collected in Estonia in 2014 were used for this research. The European Social Survey, or ESS*61, is an academically driven social survey to map long-term attitudinal and behavioural changes in more than 20 European countries. The ESS provides comparable data for nationally representative samples collected to the highest methodological standards across countries. Answers on generalised social trust and human values were available from 2,051 respondents in Estonia, with females accounting for 59% of participants. Around 63% of the respondents were Estonian-speakers and 37% Russian-speakers. On average, the respondents were 50.3 years old (SD = 19.08) and had completed 13.2 years of full-time education (SD = 3.38). Hence, the survey was representative of all persons aged 16 and over (with no upper age limit) residing in private households. The sample was selected by strict random probability methods at every stage, and respondents were interviewed face-to-face.

Our Social Trust Index was composed of three indicators:

The index computed was based on the average of the standardised scores for these items. The overall standardised alpha of the three-item measure was 0.74, with an average inter-item correlation of 0.589.

Our conceptualisation and measurement of value similarity relies on S.H. Schwartz’s*62 conceptualisation of human values. Schwartz has defined values as desirable, trans-situational goals, varying in importance in serving as guiding principles in people’s lives. According to his original theory, each individual value in any culture is locatable with respect to 10 universal, motivationally distinct basic values – hedonism, stimulation, self-direction, security, universalism, benevolence, conformity, tradition, power, and achievement–which, on the basis of their interrelationships, form a universal circular structure. Similar value types are close to each other, and conflicting values appear on opposite sides of the circle. Pursuing one type of value always results in conflict with types of values opposite it*63.

Human values can be measured by means of Schwartz’s portrait value questionnaire (PVQ‑21), which consists of 21 indicators. To assess the similarity of individuals’ value preferences with the central value profile of Estonian society, an individual-level value similarity measure was created in line with the procedure of Beilmann and Lilleoja*64. For each individual, rank order values for all 21 value indicators were estimated, and correlations with the value hierarchy were then determined, on the basis of the average scores for the Estonian population. The Spearman correlation coefficient for each calculation was used as a value similarity measure for each respondent.

Table 1 presents standardised regression coefficients from multiple regression analyses, with generalised social trust as the dependent variable and trust in institutions, the language spoken in the home, the overall feeling about the income, age, gender, individual-level value similarity, and years of education as independent variables.

To depict the effect of value similarity on trustfulness in more detail, the next image (Figure 2) illustrates levels of generalised social trust across the main differentiators – ethnicity and economic coping – while comparing individuals on the basis of the congruity of their personal value structure with the Estonian general value structure. 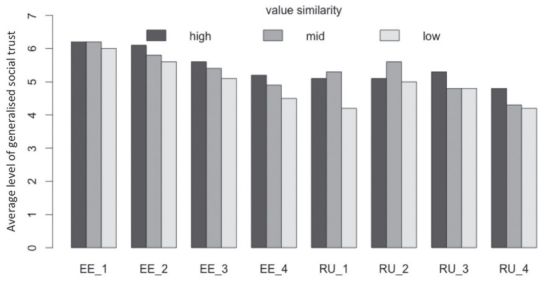 Among Estonian-speakers, the trends are very clear – throughout each economic group, the respondents with greater value similarity are, on average, more trusting than those with less value congruity. At the same time, better economic coping is systematically associated with a higher level of generalised social trust.

It has been claimed that people tend to trust those who are more like them and who share similar values*66,*67. Recent results indicate that this is indeed true in high-trust societies but not in countries where overall generalised social trust is low*68. With this article, we aimed to go further toward explaining the relationship between value similarity and generalised social trust on meso level, using Estonia as an example.

Our results suggest that when one controls for differences in socio-economic factors, value similarity remains a significant factor fostering generalised social trust in Estonian society. However, its direct effect is relatively low in comparison with predictors such as trust in the institutions considered, economic well-being, and ethnicity. When we analysed value similarity in the context of these last two variables, some substantive differentiation appeared. There exists a very clear positive relationship between value similarity and generalised social trust among the Estonian-speaking majority but not among the Russian-speaking minority. On one hand, this could be explained by the cultural differences, but when one considers economic circumstances too, these results seem to mirror the problems related to social cohesion. Social and economic equality have been found to be important factors for generating social trust*69,*70,*71,*72,*73,*74, and it seems that the economic problems facing the Russian-speaking minority in Estonia affect their trust in other people more strongly than such problems influence their Estonian-speaking counterparts. If we take into account that generalised social trust is strongly related to trust in state institutions, it seems plausible that the Russian-speaking minority’s distrust in state institutions leaves them less trusting of people in general. In that connection, we have to consider differences in culture and in the resulting expectations that the ethnic majority and minority have for state institutions. P. Ehin and L. Talving*75 have demonstrated that Estonian- and Russian-speaking people in Estonia have rather different expectations with regard to the functioning of democracy in the country. Estonian-speakers’ expectations are related mainly to aspects of procedural justice, while Russian-speakers see social justice much more often as a crucial part of well-functioning democracy. Because expectations of the state taking care of the social and economic welfare of its citizens are an important issue for many members of the Russian-speaking minority, there may result lower rates of trust in state institutions that have fallen short of their hopes for more social and economic justice, and low trust in these institutions could, in turn, result in lower levels of generalised social trust.